We got a call from a homeowner who had a leak in their attic that they had noticed after seeing a large spot appear on their ceiling. The homeowner wanted us to come out as soon as we could, so we let the homeowner know that we could be there in just a couple of hours to inspect the roof, then provide an actual estimate, which was pleasing to the homeowner.

Our roofing experts arrived to give an estimate for roof repairs in Algona, and the homeowner showed us where the water spot appeared on the ceiling. Then, he showed our crew how to access the attic. Our crew went up in the attic and then they went on the roof and located the problem. The roof needed repairing in one area, re-shingling, and a patch on the inside of the home. Our crew gave the homeowner the estimate, and he hired us on the spot and wanted us to start immediately. We let him know that we could return first thing in the morning, and the homeowner was happy with that news.

Our team completed the roofing repair

The crew arrived early to get started on the roofing repairs. Thankfully, the sun was shining and there was no rain in the forecast. The crew first went into the attic to patch the hole from the inside. They removed rotten wood, then added new wood, and within no time at all the patch was in place. The crew then went onto the roof and removed all the shingles in the area that were damaged, then they repaired this area of the roof by adding new wood, then they started re-shingling the roof. 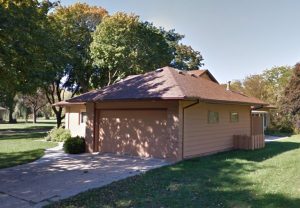 The crew worked throughout the day non-stop until by late afternoon they had the roofing repairs completed. The crew began cleaning up all the damaged shingles and debris making sure the area was totally clean before they left the home. One of our crew members let the homeowner know about all the repairs that they had done, and they let him know that if he had any problems at all or even any questions to call the office and we would return because all of the work that we had provided is backed by our exclusive warranty, which was very pleasing to the customer. The customer was just at peace that the roof only needed some repairs instead of an entire new roof, which was what he was fearing.

Our company is the professional roofing in Algona that stands behind our products and services. We get the job done right the first time for our customers, which is why we have been named Algona’s number one roofing contractor!